LIFE ANDROSSPA: Management of the SPA site of Andros Island to achieve a favourable conservation status for its priority species (http://www.androslife.gr) 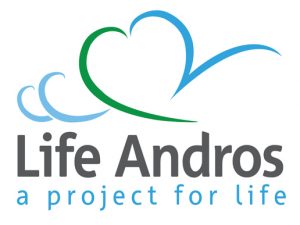 The ANDROSSPA LIFE project aimed to implement urgent conservation measures for direct conservation of  all 4 priority bird species in the SPA of Andros Island. The overall objective was to establish a well structured, effective, socially acceptable and economically viable Management Scheme for the SPA, capable to coordinate the activities of competent authorities within the site, and to carry out the core of the management needed for achieving and maintaining the Favourable Conservation Status of priority species in the SPA and implement its trial full scale operation.  Its main achievements include: (A) establishment and operation of Andros SPA Management Scheme, based on the relevant SPA Management Plan and Feasibility Study, (B) interventions on islets i.e. rat eradications, gull population control, shrub plantation and artificial nests’ construction islet-nesting priority bird species (Eleonora’s Falcon, Audouin’s Gull and Mediterranean Shag), (C) restoration of coastal wetlands for the improvement of Eleonora’s Falcon’s foraging habitats, (D) installation of mooring buoys for the reduction of seabird foraging habitat degradation, (E) limited restoration of traditional fields and pigeon houses for the improvement of food availability for the Bonelli’s Eagle, (F) establishment and operation of the Local Volunteer Group and Wildlife First Aid Centre and (G) start-up of the SPA surveillance-patrolling system, being now implemented at MA own expense, (H) production of info material, (I) establishment and operation of visitor info centre.

The present project aims to expand achievements of ANDROSSPA LIFE project to all priority species and habitats of Andros Natura 2000 to establish holistic management of the Andros protection areas  by (1) expansion of the existing Andros SPA Management Scheme operation to manage the entire Andros Natura 2000 area and its species/habitats and (2) by of use all the experience, know-how, equipment and infrastructure acquired through ANDROSSPA LIFE project in the implementation of present project proposal to effective manage and take priority conservation measures for the conservation of the entire Andros Natura 2000.

The LIFE CYCLADES project aims to establish a unique protected area on the island of Gyaros and its adjacent marine area. This effort will be based on the Ecosystem Based Management (EBM) approach, encouraging the participation and active involvement of local stakeholders from the adjacent islands of Andros and Syros.

The present project is aiming to tackle threats that the Mediterranean Monk Seals which use the area of Andros island face and further improve the conditions for the species at the Cyclades area adding to the results of the LIFE CYCLADES project LIFE12 NAT/GR/000688 (2013-17) that is implemented on the neighbouring Gyaros island including measures for the protection of the Monk Seal in the area.

The LIFE TERRACESCAPE project aims to demonstrate, on the Aegean island of Andros, the use of drystone terraces as green infrastructures resilient to climate change impacts. The project will promote climatic adaptation by mobilising scientific knowledge, traditional farming and land stewardship (LS) practices for a large-scale revitalisation of island terrace farming. By addressing climatic and environmental extremities and supporting a modern, extensive and climate-smart agricultural sector for the Mediterranean islands, profound benefits for local societies, economies and biodiversity are expected to accrue.

The LIFE Andros Park and LIFE TERRASCAPE project will be implemented on Andros during the period 2017-2012. Therefore efforts will be made to achieve best possible synergies between the two projects in collaboration in technical planning of projects’ actions, in joint demonstration of the conservation actions of the two projects to promote their applicability and benefits as well as to promote future sustainable development, in collaboration in communication of project’s results and dissemination of information material and in establishment of a flexible overall Project Integration Committee to ensure maximum possible achievement of synergies between the two projects.