The terrestrial geological substrate of the project area mainly consists of schists of various types, while limestone is found only in small areas. The non-limestone substrate is the main reason for the comparatively moist conditions in large parts of the area. Increased local precipitation and moisture are also caused by the NW-SE position and the relatively high mountains of the island.

Frequent cloud formation over Mt. Kouvaras (990 m) is the result of prevailing north winds (mainly during summer) in association with relatively high air humidity. Only lowlands situated far from the mountains exhibit a very dry summer and early autumn period, typical of the Cyclades climate. The mountain valleys and the north-facing mountain sides are moist and green throughout the summer with several small rivers and rivulets of constant water flow. This is evidenced by the presence of water turtles, fresh-water crabs, water-snakes (Natrix natrix), eels and small fishes as well as a large number of invertebrates. As a result, there is a great diversity of habitat and biotopes, most important being the alluvial alder forest (habitat code: 91E0*). 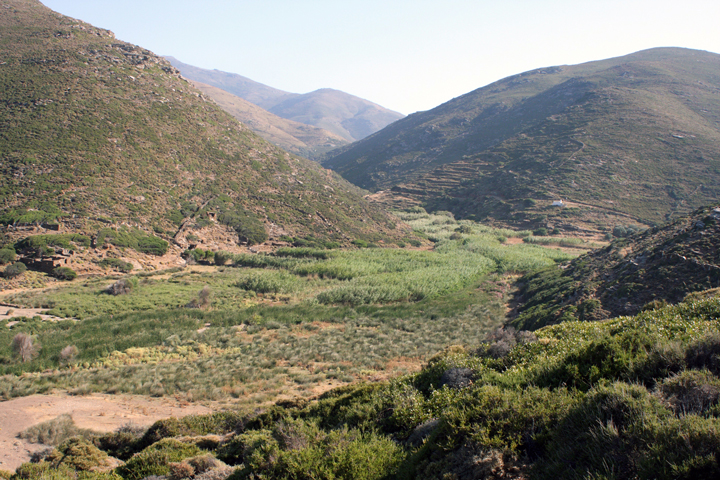 The coastline of the area is mainly rocky consisting of highly weathered metamorphic rocks (schists), forming eroding cliffs intermittent with numerous sandy beaches with shallow waters. Several perennial streams flow in the area forming small coastal wetlands. Islets are generally low-lying or flat with a smooth relief. The rocky coasts of the site are occupied by halophytic communities (habitat code: 1240) and phrygana, while embryonic shifting dunes (habitat code: 2110) and Malcolmietalia dune grasslands (habitat code: 2230) occur at the sandy beaches. The rocky coasts and 16 adjacent uninhabited islets are very important nesting and roosting areas for the Mediterranean Shag, the Audouin’s Gull and the Eleonora’s Falco. The extensive rocky parts of the coastline of the island of Andros which include numerous partially or totally submerged marine caves (priority habitat 8330*) which are of significant importance for the Mediterranean monk seal, particularly for pupping and resting.

It is also noteworthy that human activities in the area do not have such an adverse impact as it happens in other Greek islands with more intense touristic development. Main threats include construction of roads and expansion of human settlements, garbage disposal, wetland degradation, overgrazing, heavy flooding of rivers and streams (intensified in size and frequency as a result of recent wild fires) abandonment of traditional farming practices and (more recently) possible construction of wind farms and associated power lines. In addition, soil erosion strongly affects the hydrological cycle of the site and the directly dependent habitat types.